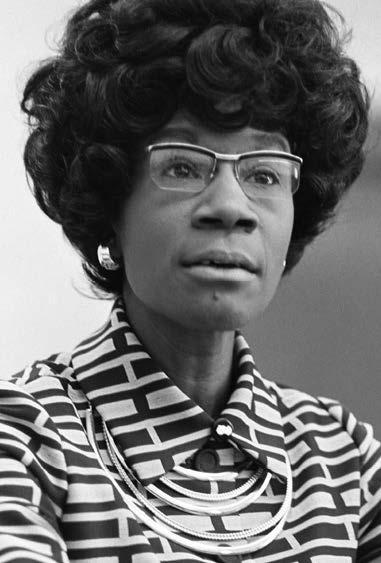 Black History Month: Celebrating the Trailblazers
Born in Brooklyn, New York, on November 30, 1924, Shirley Anita St. Hill Chisholm was the oldest of four daughters to immigrant parents Charles St. Hill, a factory worker, and Ruby Seale St. Hill, a seamstress. In 1942 she graduated cum laude from Brooklyn College to become a nursery school teacher. In 1949, Chisholm married Conrad O. Chisholm and in 1951 she earned a master’s degree from Columbia University in early childhood education and in 1960 became a consultant to the New York City Division of Day Care.
Aware of gender and racial inequities around her, in the early 1960s, Chisholm joined local chapters of the League of Women Voters and the National Association for the Advancement of Colored People (NAACP), as well as the Democratic Party club in Bedford-Stuyvesant, Brooklyn.
In 1964, Chisholm ran for and became the second African American in the New York State Legislature, and in 1968 she won a seat in Congress. During her tenure, Chisholm introduced dozens of legislation changes championing gender and racial equality. In 1971, Chisholm cofounded the National Women’s Political Caucus and in 1977 she became the first Black woman and second woman ever to serve on the powerful House Rules Committee. In 1972 Chisholm sought the Democratic Party presidential nomination. Though discrimination blocked her from participating in televised primary debates, Chisholm entered 12 primaries and garnered 152 of the delegates’ votes.
Chisholm retired from Congress in 1983 but remained an active voice in politics and human rights throughout her lifetime. Unbossed and Unbought, the title or her autobiography exemplifies her outspoken advocacy for women and minorities throughout her seven terms in the U.S. House of Representatives.
Published February 10, 2021 Print